Enter Jack, class clown and constant thorn in Pepper’s side. When he isn’t trying to duck out of his obscenely popular twin’s shadow, he’s busy working in his family’s deli. His relationship with the business that holds his future might be love/hate, but when Big League Burger steals his grandma’s iconic grilled cheese recipe, he’ll do whatever it takes to take them down, one tweet at a time.

All’s fair in love and cheese — that is, until Pepper and Jack’s spat turns into a viral Twitter war. Little do they know, while they’re publicly duking it out with snarky memes and retweet battles, they’re also falling for each other in real life — on an anonymous chat app Jack built.

As their relationship deepens and their online shenanigans escalate — people on the internet are shipping them?? — their battle gets more and more personal, until even these two rivals can’t ignore they were destined for the most unexpected, awkward, all-the-feels romance that neither of them expected.

I gave Tweet Cute 3/5 stars, which is my average rating. It means that I liked it, would definitely recommend it but that it didn’t blow me away nor became one of my favourite books ever.

There are a lot of things that I loved in this book, but I decided to start with some details I didn’t like to be able to end this review on a positive note.

As I said, Tweet Cute didn’t blow me away. In fact, it was a cute and quick read but nothing grabbed my attention to the point where I wouldn’t be able to stop reading. Don’t get me wrong, I didn’t mind picking it up but I wasn’t addicted to it. That being said, it was extremely easy to read and I thought that the author did a great job at making teenagers speak – I could hear them clearly in my head, and as I work with teenagers daily I feel as if it was pretty accurate to reality. (I know I said I would start with negative points, but anyway.)

The only thing I didn’t like was the main event of the plot: the Twitter war going on. For some reasons I can’t explain in a non-spoilery review I thought that it wasn’t realistic enough and, well, a tad too much. I would have loved the characters to talk to each other in another way because this didn’t feel real at all and the more I kept reading it, the less it made sense at all. I understand why it was there, I mean it wasn’t all for nothing or only to add drama, but I wish the author would have gone for a different option.

Now onto the positive points, and there are a lot. As I said earlier, I thought the author did a great job at representing teenagers on paper. More than that, I loved how she managed to talk about all the pressure they receive from both school and their parents. I don’t think that many people realize that teenagers are usually under a lot of stress (well, maybe not every single one of them but it’s pretty common nonetheless). In this book both the characters were under pressure, whether it was from the school they were going too (we could see Pepper struggling to do all her homework, being scared of failure to the point where she rewrote all her essays again and again, seeing her having problems to do it all, etc) or from their parents who weren’t always realizing how much they were asking from them. I’m sure that many teens will see themselves in this part, and that’s what I loved the most.

I also loved how it talked about social media. For example, it showed the bad parts of it (some can use them for bullying, there are stupid wars on Twitter and all those things) but also all the good ones when used correctly (students met up to study, teens met and found happiness talking to each other online, without any social pressure). It also showed how being a social manager in a big company is a lot of work: at one point Pepper’s mom tells her that tweeting twice a day isn’t a full job, and Pepper tells her that it is because it comes with a lot of other things she doesn’t seem to realize. It was really interesting to see in a YA novel: I worked in that field for three years, still have my Instagram + my blog (and my YouTube channel) and not a lot of people seem to realize that it is in fact a lot to deal with.

In the end, Tweet Cute was such a sweet and refreshing story, which I would recommend to anyone who loves YA contemporary and well YA romance.

❥ Where to pre-order it 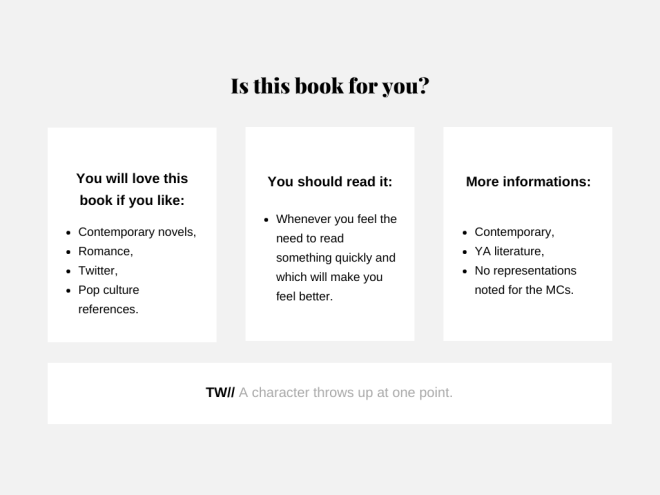