You may not know but I do not watch a lot of movies or tv shows. I want to but I have this small problem: I can’t usually focus for more than 30/40 minutes. I tend to get easily distracted, can’t take what I’m watching seriously anymore and do something else next to it. (My friends hate me for this.) However, I decided to change all of this in 2018.

I realised that going to the movies, in this big dark room without any signal, allows me to actually watch the film without saying much. I don’t get as distracted as I use to and I somehow fell in love with the idea of going out to see something on the big screen. That is why I decided to get myself an unlimited movie card, which allows me to go see any movies I want for a small price (as long as I see at least two movies per month). And because I did that, I started to list down all the movies I saw, as I realised that I couldn’t remember anything I saw in 2017 at all.

So here is why I will start talking about movies (and tv shows, as I tend to watch some episodes every night to help me fall asleep) on this blog.

Let’s review what I watched in January.

I admit it: I re-watched the last Star Wars movie two times in January, which means that I have now seen it eight times in total (but as I have my card now, it’s okay). I came to the conclusion that even though it isn’t my favourite Star Wars movie, I still love it a lot and I adore how it’s changing everything, showing us new things and new perspectives to this world we already know a lot about. My thoughts on the characters change a lot but I adore them all, even though I still don’t understand one of the characters’s actions in this one. I believe I now have seen it enough but it made me want to re-watch the entire saga once again. 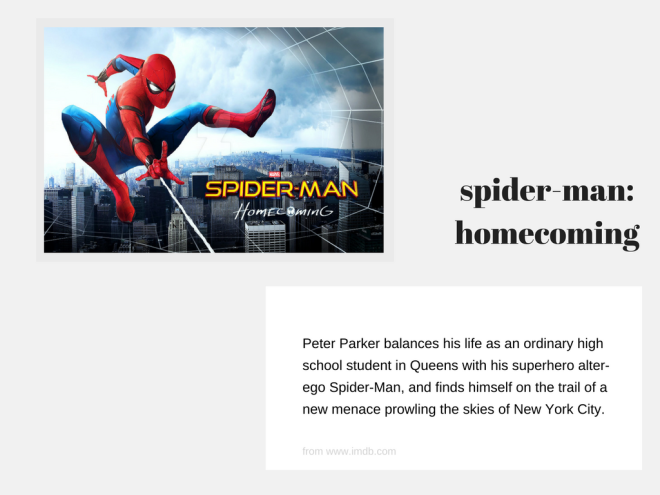 I can see all of my friends rolling their eyes at me right now, and that’s mostly because most of them are tired of me watching this movie (and no one wants to watch it with me anymore). I stopped counting but I know I saw it two more times in January (I have seen it at least twice every month since it came out in DVD). I still adore it, it still is my favourite Spider-Man movie and it still is one of my favourite Marvel movies (maybe my favourite at all). Watching it always makes me feel good and relaxes me, even though I now know it by heart (and Tom definitely is the reason why). 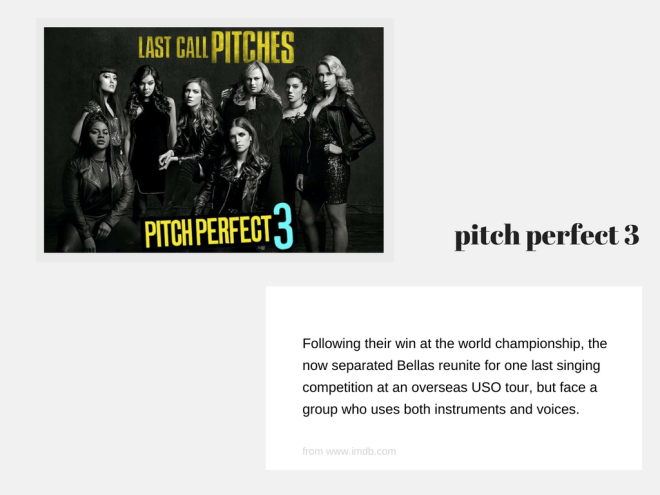 I was so excited to watch it and a bit nervous as well but it was funny, completely crazy and it mostly made me happy. This conclusion isn’t necessaraly spectaculary – it wasn’t the best one of the three for me. However, it was so amazing to watch: Every songs were incredible, it was super funny and colourful. I actually had a great time, even though Ben Platt wasn’t in it (but I already knew that). It’s a completely crazy conclusion to this trilogy that it definitely is worth the watch.

Of course, after watching the third movie I wanted to re-watch the first one and I did it as soon as I came back home. This movie is somehow important to me because it’s what introduced me to Ben Platt when it came out and because I was following him on social media ever since that’s how I discovered my second favourite musical when it started at Broadway, Dear Evan Hansen. Seeing him again, so little and so cute, in this movie made me so happy and emotional. I came to the conclusion that I adore this first movie and I keep listening to the songs on repeat. 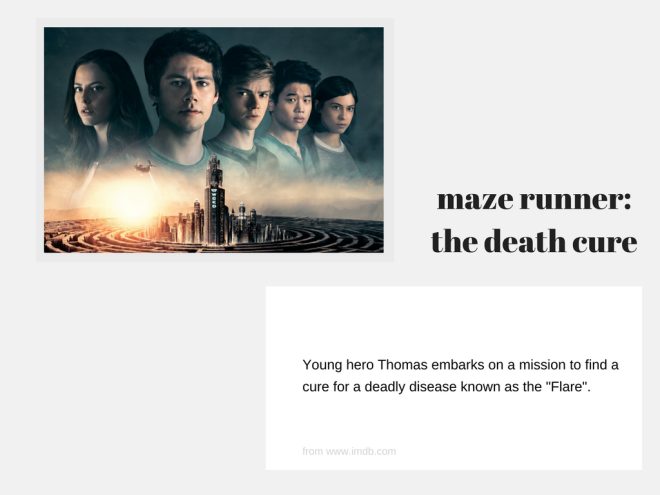 I went to the first movie premiere and to the second one, so of course I had to go to the last one, no matter how late it came out and how little did I care about the series now. Thomas Brodie-Sangster and Kaya Scodelario were there but I already saw them at the second premiere – the important thing was that Dylan O’Brien was here and that my best friend, who loved him for a lot for years, will finally get to see him. So of course, I bought us tickets.

When I got there, I wasn’t excited. The movie started and I realised I didn’t want to be there, that I wasn’t in the mood to watch a movie. But it was surprisingly so good and full of action that soon I was hooked. It was a bit violent for me and I’m someone who is scared easily and who can’t stand gun violence on screen (well, at all) but I still loved it a lot. I came out with a big smile on my face and way too much energy.

In the end, I adored this movie, even though I hated the last book (and I realised that I actually prefered all the movies to the books for this trilogy). It really was an epic conclusion to the series. 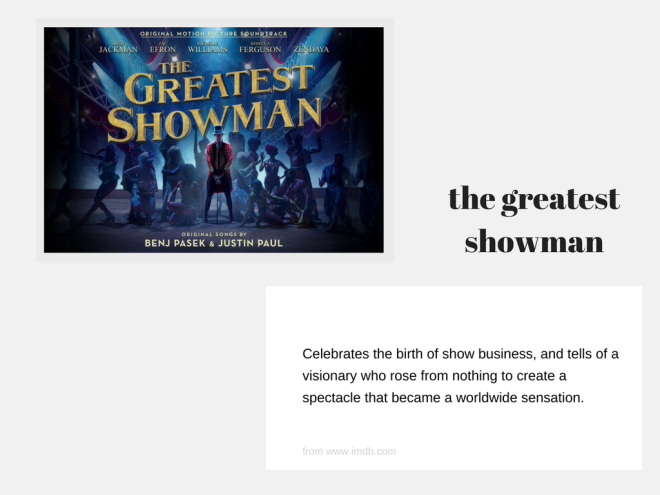 Here is the thing: I have been waiting for this movie forever, mostly because the songs were produced by Benj Pasek, Justin Paul and Alex Lacamoire (they all work on my favourite musicals) and because of the cast (Hugh Jackman, Zac Efron, Zendaya…). However, when it came out, I started seeing some bad reviews and since we had to wait forever to finally have it in France, I was getting more anxious everyday.

When I finally saw it, I was excited and scared: Would I be disappointed? The hype was high. I knew I loved the songs because I have been listening to them ever since they came out, but the movie could still be bad

In the end, I was indeed disappointed. Though the songs were perfect, the cast incredibly talented and the images oh-so-beautiful, the whole movie let me down. For me, the script was lacking, everything happened too quickly and there was no depth to the story.

But the thing that disappointed me the most was the message behind it: Most people came out saying they felt empowered and proud of who they are, and that’s definitely not something that worked out for me (but that doesn’t mean that people who loved it got it wrong, as I am extremely happy to see that many others came out that moved by it). When I left, I felt nothing. I didn’t see people being proud of who they are in this movie: I only saw a man exploited people for money.

The thing is that the real Barnum was a monster and even though the movie isn’t supposed to be historically accurate, it was still too close and I saw Barnum for who he truly was. I never felt anything for him, no matter how much I wanted to because of Hugh’s huge smile, and I was somehow disgusted by everything he was doing. In the end, the movie romanticised Barnum and it got me really sad.

Even though this movie was aestheticly beautiful and the songs were perfect, I thought the message behind it was weak and weirdly delivered . I’m glad to see that many others were inspired by it, but sadly it didn’t work out for me. 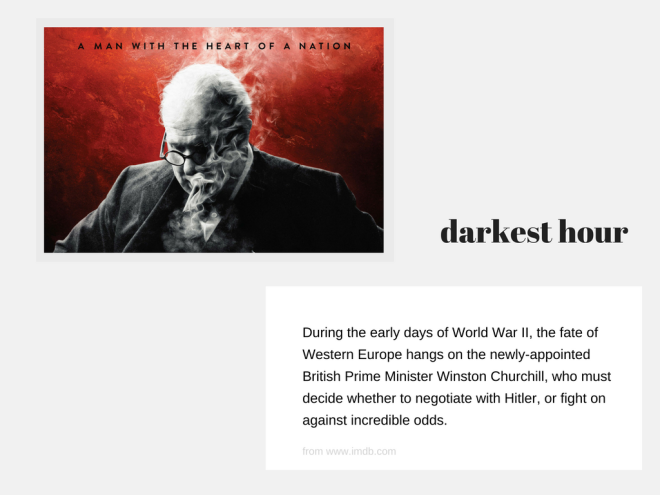 And here we have my favourite movie of the month.

I was very scared to see it because I always admired Winston Churchill while studying him at school and I just wished he would have been portrayed right. Well, let’s just say it did. The whole movie was beautiful, the script was incredible and every actor was perfect. I cried two times, once during the Calais scene and another time during the underground scene, and it felt good. It made me feel strong and made me realised many things. This is the movie that empowered me. 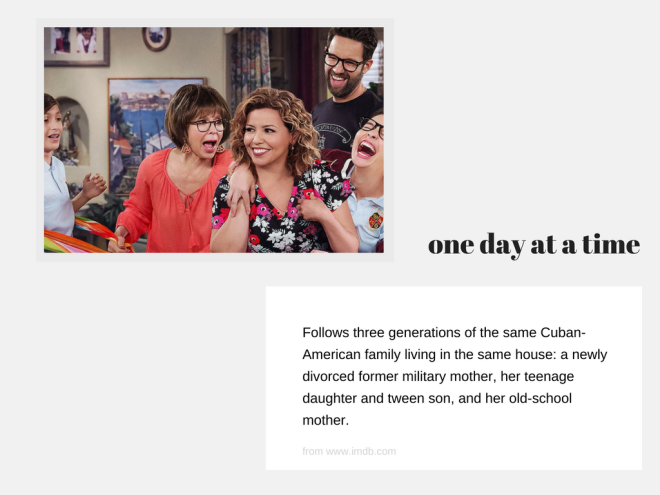 I already talked about it on my last blog post because it has been one of my favourites of January but here we go again: Please, watch it. Just do. It’s amazing, funny and mostly important. It deals with so many things and it got me crying at every episodes because of how true it was. Just run on Netflix and start watching it.

A lot of my IRL friends have been making fun of me for this but who cares. It’s a French children show but I have seen so many people from all around the world watching it that I had to try. This cute story of two super heroes in Paris makes me so happy everytime I watch it and I am glad that I have so many episodes to catch up on.

My best friend made me start it and I’m really glad I did. It’s a Netflix tv show that starts with Dylan when he discovered he has chlamydia and decides to call every person he had sex with in the past. It’s funny, light (and it looks a lot like HIMYM somehow). I haven’t finished watching it yet because the second season of One Day At a Time aired but it always makes me laugh whenever I watch an episode.

It was quite a long blog post but I hope you still liked it. Tell me what you watched this month, if you’ve seen any of those I talked about or else.

4 thoughts on “What I watched in January”